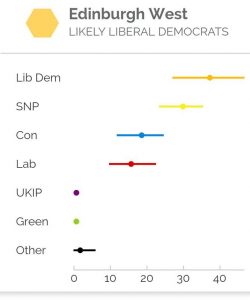 According to the latest opinion polls, the SNP is set to lose Edinburgh West as a result of a massive 7% swing – a huge movement in favour of a  ‘so-called’ ‘minority’ candidate – in favour of Scotland’s Independence Referendum Party (see chart, left).

‘It’s note too late for voters in Edinburgh West- which recorded the largest ‘keep Scotland in the EU’ vote in Scotland – to vote against the so-called British ‘Unionist’ parties – and vote for Scotland’s Independence in the EU.

‘Polluted’ SNP set to lose Edinburgh West to Liberals: we told you so: http://urlin.it/144ed2 + http://www.scotlandsindependencereferendumparty.scot/

Whittet – who resides in Edinburgh West and who formerly served an elected councillor in the capital as a member of the city’s Barnton, Cammo and Cramond Community Council – said:

“Whether you vote Tory, Labour or Liberal next month, Edinburgh West – and Scotland – will still be force-fed a full English Brexit on 9 June.

“England has voted for the full Brexit – ie British Independence – from the European Union.

“And – rightfully respecting the clear wishes of the people of England – the English-dominated British parliament will unilaterally yank Scotland out of the EU as part of Westminster’s duty to enact the full ‘British’ Brexit.

“Yet neither Edinburgh city, Edinburgh West nor Scotland – want this. We clearly voted against the full English Brexit in last year’s Euro-rendum.

“But what is entirely unfair and totally un-democratic is for the British Unionist parties to claim that there is no mandate for a second Scottish Independence Referendum.

“The voting system for Scotland’s constituencies – including Edinburgh West –  in the British parliament at Westminster is rigged by an un-democratic voting system that gives the  London-based, British Unionist parties three  – unfair – chances of winning.

“We urgently need a fair voting system to Westminster (another ‘promise’ which the Liberals u-turned on) – as well as Holyrood – and Scotland’s Independence Referendum Party will ALWAYS put Scotland’s interests first.”

NB: If Scotland’s Independence Referendum Party – set up just 8 weeks ago – wins (at least) 5% of the vote in Edinburgh West (when 15% of voters have already voted in postal votes for British Unionist parties) this will be a massive achievement for a ‘so-called’ ‘minority party’, which also means the SIRP will retain its £500 deposit for standing as a candidate to the British Unionist parliament at Westminster.