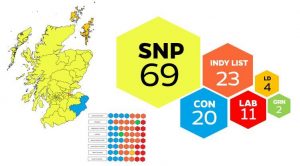 In April 1916, Irish republicans launched the Easter Rising against British rule and proclaimed an Irish Republic.
In the December 1918 election, the republican party Sinn Féin won a landslide super-majority victory in Ireland.
On 21 January 1919 they formed a breakaway government (Dáil Éireann) and declared Irish independence.

en.wikipedia.org › wiki › Irish_War_of_Independence
Search for: How did Ireland gain its independence?