The annual Government Expenditure and Revenue Scotland 2016-17 (GERS) report has been published today.

“Whatever statistics are published in this report, they will not paint the whole picture.

“The GERS report was expressly designed by a Tory-run Brit-Govt to create confusion and to paint a one-sided picture of why Scotland is ‘too poor, too wee, too stupid,’ etc to be Independent.

“The GERS report should be shown the ‘red card’ and kicked into touch – permanently.

“Only with an independent economic study – including the real data on Scotland’s oil wealth – can voters be asked to make up their minds on an Independent Scotland.” 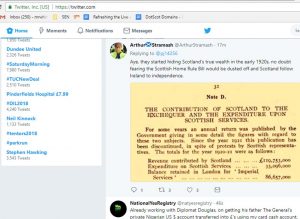 GERS is a really, really terrible advertisement for the Union.

GERS was deliberately designed from the outset by the UK government to make Scotland (and the non-Tory parties) look bad.

The “£15bn black hole” in GERS screamed across every newspaper this week is a fallacy, because the target balance of a government is not zero.

GERS – by the universal agreement of everyone except Unionist politicians and the Scottish media – has no bearing whatsoever on the finances of an independent Scotland.

GERS is also totally irrelevant in the context of independence for a second crucial reason – the entire point of independence is to NOT keep doing everything in Scotland the same way it’s been done in the UK.