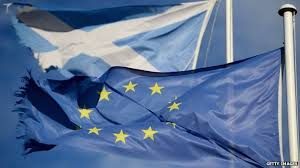 With just 90 days to Brexit Bourach Day on 29 March 2019, most Scots are in favour of Scottish Independence, according to the latest opinion poll carried out by Panelbase.

The Panelbase poll for the Sunday Times (Sample: 1,028 adults; Fieldwork: 30 Nov – 5 Dec 2018) put support for Scottish independence at 47% and found a majority of Scots would back independence over both a No Deal Brexit (59%) and the Bad Deal scenario negotiated by the Prime Minister (53%).

“UK prime minister Theresa May once vowed that ‘now is not the time’ for a second Scottish Independence referendum.

“The closer we get to the Brexit bourach  (aka ‘dog’s dinner’ or ‘farrago’) of May’s ‘No-deal’ or a ‘hard deal’, the greater the popular support for Scotland’s Independence there is.

“No UK prime minister can order the waves of increasing democratic support for Scottish Independence to simply ‘turn back’ King Knut style – and if Theresa May tries to do so again, she will simply be washed away by the growing wave of support for Scotland to be Independent.

“Because there is no parliamentary majority support in Westminster for May’s ‘Hard Brexit; – which will rip Scotland out of the EU – despite the democratically express wishes of most Scots – the inevitable result will be a ‘no-deal’ Brexit bourach on 29 March 2019.

“This will likely result in the biggest self-inflicted economic shock the British economy has ever seen – and involuntarily plunging Scotland into an unnecessary and entirely avoidable recession.”