Sturgeon surge is over: SNP must stand down to put Scotland’s interests first in Edinburgh West 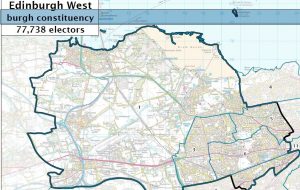 “’Peak-SNP is over and the only way forward is a progressive alliance with Scotland’s Independence Referendum Party – which will always put Scotland’s interests first.

“The opinion study by SurveyMonkey indicates that the SNP could fall from 56 MPs to 42 – down 14 on their historic 2015 landslide.

“With the possible exception of Edinburgh West, all of these seats will go to anti-Scottish, British Unionist parties based in London.

“The SNP is a soiled brand in Edinburgh West because of the party’s difficulties with their last SNP. As a result, the SNP cannot win Edinburgh West – but Scotland’s Independence Referendum Party could.

“So the ‘Sturgeon surge’ is over and the SNP must stand down to put Scotland’s interests first in Edinburgh West.

“As one party leader to another, I have written to Nicola Sturgeon asking her to take part in a progressive alliance to put Scotland’s interests first here in Edinburgh West – as we state in Clause 2.1 in the Constitution of Scotland’s Independence Referendum Party:

Independence for Scotland; that is the restoration of Scottish national sovereignty by restoration of full powers to the Scottish Parliament, so that its authority is limited only by the sovereign power of the Scottish People to bind it with a written constitution and by such agreements as it may freely enter into with other nations or states or international organisations for the purpose of furthering international cooperation, world peace and the protection of the environment.

“Former US president Barack Obama – speaking in Edinburgh last week – is entirely correct when he said ‘Scotland has a lot to offer’.**

“But Scotland could do so much better as an Independent nation in the EU.

“For the second year in a row, Scotland has attracted more projects than ever before – with 2016 up 2.5% on 2015’s previous record – and Scotland has been the top UK region outside London in every one of the past five years.

“The statistics not only confirm Scotland’s position as the top UK region outside London for foreign and direct investment, but highlight the underlying strengths of the Scottish economy.

“We enjoy resources few nations can match, including one of the most highly-educated workforces in Europe, a long-standing reputation for innovation and an internationally-regarded brand.

“But with Scottish Independence in the EU – which is what 2 in 3 Scots voted in favour or, and against the full English Brexit  – Scotland could do even better.

** NB  It is curious to note Obama’s comments on Scotland’s Independence Referendum when, in 2014, as US President, he publicly cast doubts on what Scotland has to offer as an Independent nation.