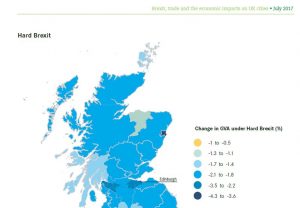 OFFICIAL: City of London report says that Aberdeen and Edinburgh will suffer twice as much as UK average in Tory-led ‘hard’ Brexit’

The economies of every major British city are set to decline under the ‘hard Brexit’ plan being forced through the parliament by the Brit-Govt.

But the economies of the oil and gas based Aberdeen-Grampian and  financial services-based Edinburgh-Lothian regions are set to fall by twice as much as the UK average, according to the findings of a new report published today (27 Jul 2017) by a London-based think-tank.

“Yet they still voted too often for British Unionists parties – knowing that the Tory-led minority UK government will drag Scotland out of the EU against the clear wishes of the vast majority of Scottish voters.”

Dundee and Glasgow will still suffer WORSE than the UK-hard-Brexit-average (but not as badly as Edinburgh and Aberdeen) but only because – overall – these city-regions are still based on low-tech, low-skill, low-wage economies.

The study from the think-tank Centre for Cities and the Centre for Economic Performance (CEP) at the London School of Economics (LSE), shows that Aberdeen is expected to see the biggest decline in economic output across the UK. Edinburgh is also set to be hit hard by Brexit.

The impacts are predicted to be more negative under hard Brexit in every local authority area, as the increase in trade costs would be larger.

Economic output in cities as measured by Gross Value Added (GVA) is predicted to be 1.2 per cent lower on average under a ‘soft Brexit’ and 2.3 per cent lower under a ‘hard Brexit’ than if the UK remained in the EU.

But cities with high shares of employment in the private knowledge and information-based (KIBS) sectors are more likely to be negatively affected according to the model, particularly under a hard Brexit.

In the three cities with the largest private-KIBS sectors – Reading, London and Edinburgh – the predicted loss is equivalent to 2.7 per cent of GVA.

Cities that are predicted to be most negatively affected by Brexit – where Edinburgh West was one of the most anti-Brexit seats in Scotland – were more likely to vote remain in the 2016 referendum. 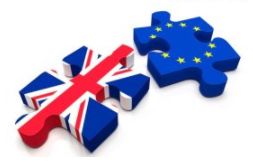 Mark R. Whittet, Leader of Scotland’s Independence Referendum Party added: “Unless Scotland – and  SNP leader Nicola Sturgeon wake up – we’ll be hauled off the EU-economic cliff-edge and crash to economic ruin on the rocks of a Hard Brexit.

“That is why the SNP must accept the offer from Scotland’s Independence Referendum Party to work together in a progressive alliance in a coalition to maximise the pro-Scottish Independence vote in the next Holyrood general election.”

To find out more: