UK POLITICS; Statement from Nicola Sturgeon, SNP Leader: Whether you vote Tory, Labour or Liberal, Scotland will still be force-fed a full English Brexit on 9 June 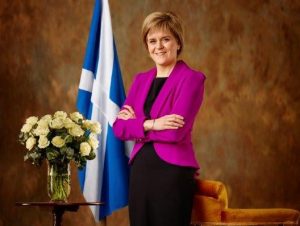 NO! This is not (yet) the key message from SNP leader Nicola Sturgeon for the British parliamentary elections next month.

But it should be – according to Mark R Whittet, Leader of Scotland’s Independence Referendum Party and party candidate for Edinburgh West in the UK general election on 8 June, 2017.

Whittet – who resides in Edinburgh West and who formerly served an elected councillor in the capital as a member of the city’s Barnton, Cammo and Cramond Community Council – said:

“Whether you vote Tory, Labour or Liberal next month, Edinburgh West – and Scotland – will still be force-fed a full English Brexit on 9 June.

“England has voted for the full Brexit – ie British Independence – from the European Union.

“And – rightfully respecting the clear wishes of the people of England – the English-dominated British parliament will unilaterally yank Scotland out of the EU as part of Westminster’s duty to enact the full ‘British’ Brexit.

“Yet neither Edinburgh city, Edinburgh West nor Scotland – want this. We clearly voted against the full English Brexit in last year’s Euro-rendum.

“But what is entirely unfair and totally un-democratic is for the British Unionist parties to claim that there is no mandate for a second Scottish Independence Referendum.

“The voting system for Scotland’s constituencies – including Edinburgh West –  in the British parliament at Westminster is rigged by an un-democratic voting system that gives the  London-based, British Unionist parties three  – unfair – chances of winning.

“We urgently need a fair voting system to Westminster (another ‘promise’ which the Liberals u-turned on) – as well as Holyrood – and Scotland’s Independence Referendum Party will ALWAYS put Scotland’s interests first.”